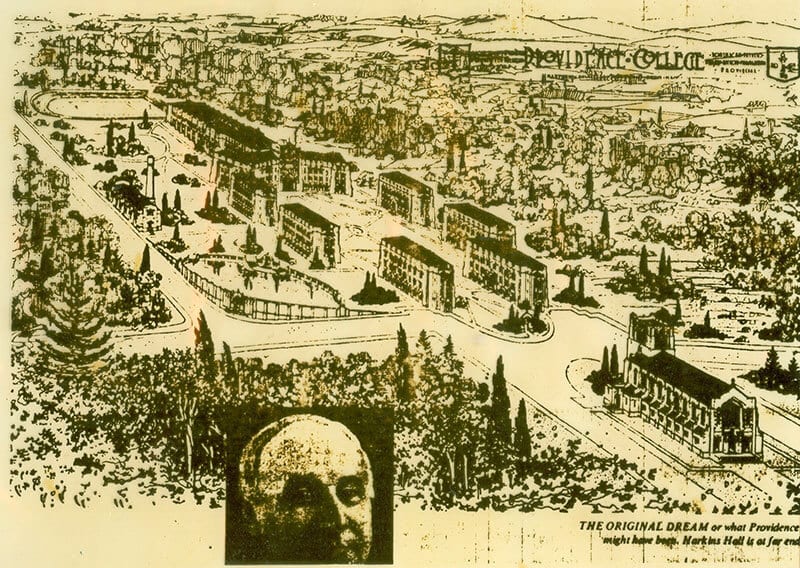 The Founding of Providence College

Much of the material used in this story was drawn from “The Origins and Early History of Providence College Through 1947,” the dissertation of the late Dr. Donna T. McCaffrey, former PC associate professor of history, which was published in 1985.

In the first five months of 1915, Bishop Harkins met with Father Meagher in Providence and resumed negotiations for a college. Harkins and Meagher joined forces to make the idea a reality. With courage and boldness bordering on the foolhardy, they trusted in God to take care of the specifics, while they rolled up their sleeves and did everything but dig the foundation for Harkins Hall.

In mid-May 1915, immediately after consultation with Father van den Wildenberg, Bishop Harkins wrote directly to the Dominican Master General, “We petition your paternity to grant permission to the Fathers of the Province of St. Joseph to undertake the burden of a college of higher learning in our episcopal city.” In this petition Bishop Harkins conveyed his concern that “secular universities present dangers to faith and morals of Catholic students.” Bishop Harkins requested that permission be given this undertaking, as the college would provide the means by which the Catholic youth of his diocese could be “formed not only in the knowledge of humanities, but especially in the principles of sound and healthy philosophy, as well as in the pious discipline of a holy life.”

No documents exist which reveal the progress of the petition over the summer of 1915. However, in the fall of 1915, Father Meagher wrote apologetically to the Bishop:

I regret very much that my work for some months has been for the most part in the Western part of our province and for this reason I have not had the opportunity of seeing you to report the progress of our obtaining permission from Rome for our new foundation in Providence.

He went on to attribute the lack of resolution to “a delay on the part of the Roman authorities in order to investigate our financial status.” Father Meagher also indicated that he had asked a representative of the Province to proceed to Rome and “make his report” on the financial status of the Province of St. Joseph; thus, Father Meagher assured the Bishop that he had “no fear of the outcome.”

The financial question was probably a major reason for the delay; yet, another underlying motivation may well have had its part here. Father Meagher knew that he could not expect to succeed where Father Heagen had failed in persuading the Master General to grant the necessary permission; but Father Meagher also knew Cormier’s term as General would be over in about ten months and that the aged and ailing Frenchman would not be physically capable of accepting re-election.

Nevertheless, the audacious Father Meagher gambled. He proceeded with plans and took the initiative. He indicated to Bishop Harkins that “the formal renewal of the application should come from the Provincial Chapter,” which would meet in mid-October 1915. On the advice of his representative in Rome, Father Meagher suggested to Bishop Harkins that “it would be advisable and most effectual as far as Rome is concerned to have a formal invitation [in English] presented by the Bishop to the Fathers to erect and maintain a College in Providence.” Tactfully, Father Meagher indicated that “this document could then be sent to Rome with the petition of the Chapter,” the result of which Father Meagher optimistically wrote would bring “an immediate response.”

Choosing to pursue the matter, Bishop Harkins responded almost immediately in a personal letter to “My dear Father Meagher” on October 9, 1915. Attached to the letter was “a simple petition and a couple of maps which show a) a location of land- b) and what a center of population this city happens to be-.”

The Bishop explained his long-term goal, his selection of the Dominicans and his plan for the new college:

Convinced of the expediency of such a college, and having with continued interest followed throughout the last forty years the work of the Dominican Fathers in New England, I hereby extend an invitation to said religious community of the Province of Saint Joseph—the language of which province is English—to found within the limits of the Diocese of Providence a college in which the courses usual in colleges of three of four years in length and preparatory to degrees conferred by chartered institutions, except that of theology, would be followed.

Bishop Matthew Harkins also included with the invitation his generous intention to give the Dominicans “under the laws of the State of Rhode Island, a certain tract of land situated within ten minutes of the civic center of Providence, said land measuring eleven (11) acres.” In closing, the Bishop declared that “I will establish in said college, in such manner and form as will be agreed upon, scholarships representing in capital ($10,000) Ten Thousand Dollars.”

The petition and the generous grants offered by the Bishop of Providence were immediately laid before the Dominican Intermediate Chapter then meeting in Washington. On October 11, 1915, the Chapter voted to accept the Bishop’s offer.

In his letter of the same date to Father Cormier, the Master General, Father Meagher spoke for the Fathers of the Chapter:

We humbly request of your Paternity permission to accept a college, (about which more details will soon be available) and which the most illustrious and Reverend Harkins, Bishop of Providence, wishes to grant our Fathers – a testimony of his high esteem of our Province.

Again, Father Meagher accentuated the Bishop’s concern for his Catholic youth. “It is true that in the city of Providence there already exists a celebrated secular university but because of the doctrine taught there, no little danger presents itself to Catholic students.” With the tradition of the Dominicans “the sound Thomistic philosophy to be taught by us … would exercise a salutary influence against” the secular dangers.

Furthermore, the canny Provincial urged upon the Master General an additional benefit. Father Meagher indicated his belief that the college would “be a most fertile field for vocations to our Order,” as the Providence Diocese was rich with priestly aspirants. Again, six days later, the Provincial wrote diplomatically to Father Cormier that “the Intermediate Chapter of the Province has come to an end, having deliberated with fraternal Charity, and I write this summary to your Paternity that you might have more detailed information.” The summary emphasized Father Meagher’s fervent wish to begin the college work and offered a detailed synopsis of the college proposal. Placing the issue as the primary item of attention, Father Meagher wrote:

First, concerning the foundation of a College in the city of Providence, this will be a great help to promote the good of religion and to obtain vocations to our order. The city called in the vernacular Providence, is the principal city in the State of Rhode Island. The Catholics there number three fourths of the population. There are numerous vocations to the clerical religious life both for the State of Rhode Island and for other States. There are more than sufficient Fathers in our Province to found such a College. For ten years, our Fathers have had the care of a College in the City of Columbus. This College in Columbus does not meet our needs because of the great distances involved. The City of Columbus is as far from the City of Providence as Rome is from the City of Paris. All the Fathers of the whole Province hope and pray fervently for this permission to found a college at Providence and that your Paternity will give permission. The Bishop of Providence, the Most Reverend and Illustrious Harkins, assured me before the Father Professors at the Formal Studium in Washington of his generosity not yet actualized but promised, and also of the assurance of generous support on the part of the other priests of the diocese and the friends of the Most Reverend Bishop.

With this final plea to Father Cormier, both the good Bishop and the energetic Provincial had now to wait for an answer from Rome.

On November 8, 1915, the Italian-American liner Ancona sailed from Naples, Italy, under Captain Massardo. New York-bound, with 422 passengers and 160 men in the crew, the ship also carried a mail satchel containing the Acts of the Intermediate Chapter of the Dominican Province of Saint Joseph. The Acts were stamped with the approval of the Master General.

On November 9, 1915, the Ancona was torpedoed in the Mediterranean by a large submarine flying Austrian colors. With much of Europe engaged in World War I, submarine warfare was taking its toll on nonbelligerents. The Ancona sunk. About 270 lives were lost, including those of twenty-seven American citizens. All cargo and mail went down with the ship. “The Acts unfortunately went down with the Ancona.” World war, not for the last time, delayed the institution of Providence College.

Not until January 29, 1916, did Father Meagher inform Bishop Harkins that “after a long wait, I have received the Acts of our last Provincial Chapter in which permission is given to us to accept your invitation to erect a college in Providence.” After the sinking of the Ancona, Father Meagher was obliged “to acquaint the Roman Authorities with the fact that we had not received the Acts and…obtain a new copy.”

“In approving the chapter, the General implicitly at least, approved the [college] petition.” Meagher acted upon the implicit permission and wrote Bishop Harkins that “I am most gratified that I am able to begin this work.” Meagher was premature in his action. The official permission – the Beneplacitum Apostolicum was not granted. Master General Cormier did not initiate the steps necessary to secure official permission. He “subjected it to a kind of pocket veto – – He just did nothing about it.” Was the Bishop’s dream to be thwarted again? No, official permission finally came from Rome because of Louis Theissling, O.P. Theissling replaced the ailing Cormier as Master General. The new Master General was a proponent of the active seven-hundred-year-old Dominican teaching apostolate and secured permission in 1915.

On February 14, 1917, Rhode Island Governor Robert Livingston Beekman signed the Act to Incorporate Providence College into law. On February 24, 1917, Benedict XV’s papal permission — the Beneplacitum Apostolicum – was granted, and on February 28 Master General Theissling ascribed his formal permission to the papal document. With the consent of the people of the State of Rhode Island and the blessing of the papacy, Bishop Harkins’ dream was legally and canonically founded. Providence College can thus date its founding in February 1917 as legally February 14, papally February 24, or as a Dominican institution on February 28.